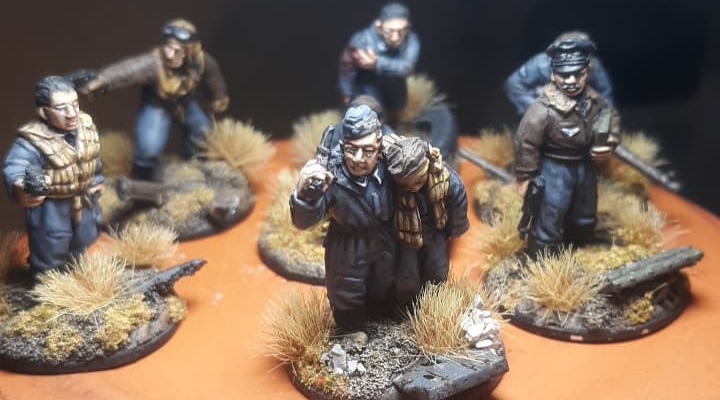 With the cancellation of Adepticon 2020, I decided it was time to get work done on my Bugeater 2020 army. The Bugeater GT is a two-day Bolt Action event, June 6th and 7th, in Omaha, Nebraska run by another Bolt Action player, Josh Dunn (top guy and great event organizer). Last year it had over 30 attendees, rapidly growing from an event for 10 only a few years back. This speaks highly of the event and its organization.

Side Note: I know with the current situation with the COVID-19 Pandemic, most events are on hold or are cancelled for the foreseeable future. But it’s an excuse for me to own an Axis army, even if the event does not happen.

Firstly, I don’t have a painted Axis army. I won Operation Phoenix last November and with the prize came an awesome gift certificate from Badger Games LLC based out of Wisconsin. I didn’t really know what I wanted so I shopped around for an hour looking at their extensive range of products and found a Downed German Aircrew unit which would make a great mission objective for my British Paratroopers, and I couldn’t resist some of Crusader Miniatures’ awesome early to mid-war Germans. So, with an emptier bank account and nothing left of the gift certificate I walked away with a new army.

Here’s where my dilemma started, I wanted to include the downed aircrew, since that was the reason I got the models. A rapid hunt for my Armies of Germany book and ideas with the rest of the Chicago Dice crew came back with using them as Inexperienced Luftwaffe or Brandenburgers behind enemy lines sowing confusion while Allied units were hunting for them. I decided on the latter as these are just too cool to be Inexperienced, and decided that I had to figure out some background for this army before starting the project.

The timeline is September 1943 and the platoon is based around an Anti-Partisan List. It seemed to fit the northern France feel with bomber crews returning with damage and some crews having to bail out before safe return to their secure airfields. The platoon is a Heer infantry-based selection with no armor to speak of, relying instead on lighter weaponry as enemy forces were also lightly armed and more elusive. The recon element is on horseback, firstly because of the cool models but also to act as swift support to the slower infantry. The Brandenburgers are the downed aircrew, who the French Marquis are hunting and the German units are trying to rescue.

The Project So Far

Above is the unit of Aircrew that are acting as the Brandenburgers. The models are easy to paint due to the amount of detail and I highly recommend them.  I had so much fun painting these as they have a lot of cool detail and are very thematic.

Crusader Miniatures has an extensive line of WW2 German miniatures including three sets of cavalry, one command unit, and two regular sets. These were so much fun to paint with minimal mold lines and with high details to suit any style of painter. The German Shepherd was a model I had lying around and I just though Hauptmann Hans Gruber could do with a Marquis hunting buddy.

This Anti-Tank Rifle team comprised of shooter and spotter were a great little edition, but I painted it more because I just wanted to. I will have to research how late into the war the Anti-Tank Rifle was used as it seems that the newly developed Panzerfaust played more of a role later into 1943 but I think that anti-partisan units would not be equipped with the Eastern Front tank hunting weapons.

My fire support comes in the guise of a mortar team from Battalion HQ. It is vital for laying down suppressive fire, allowing my troop to evade enemy light armor if encountered, maybe rolling that lucky 6 and taking it out, saving my units from eventual death. Of course, it comes with the trusty spotter, making it easier to utilize effectively.

The final unit painted so far is my assault unit detachment, comprising of a two-man flamethrower team. If the Marquis will not reveal the location of the downed aircrew, these troops will place fire upon the homes of the enemy, making this terrible weapon an essential part of the rescue plan.

More cavalry to make the reconnoiter element of the platoon. Then after that a light anti-tank gun that will be towed by a horse team. Once these are done, I’ll do a  point count and fill in any remaining points and run a few playtests. So, here’s hoping Bugeater 2020 is still going to go on and the German Army can be successful. My goal is to win Best Painted – the actual gaming is up to the dice gods.

Finishing up a batch of scatter terrain bases for the France table. Combination of Warlord Games and Rubicon Models kits. - Andrew
Working on terrain for a new Bolt Action table, Sarissa kits continue to impress. Love this Chateau. - Ben
Some shots for yesterday's Bolt Action Escalation tournament at Polar Vortex 2022! I had a fantastic time as TO, could t have asked for a better group of players.
One. Step. Closer.