Adepticon this year was a blast. It proved to be a much needed weekend of playing games, seeing friends and spending unreasonable amounts of money in the vendor hall. Our favorite event, Bolt Action Doubles, was filled with both familiar faces and a lot of new ones, which is fantastic! Jeremy Williams, the Chef of War himself, was back to run the event and once again knocked it out the park.

As you may have seen in the Showcase article we chose to run a mix of Kriegsmarine (German navy) and Grenadiers in our doubles force. We created a what-if platoon of U-boat transported commandos raiding a radar station on the English coast. To represent the U-boat fire support we included a FlaK 88 and 2 cm flak gun, all manned by Kriegsmarine. Kriegsmarine infantry squads were also included to provide support for the veteran Grenadiers. As these troops had no way to bring along their own trucks or ammunition carriages on the U-boat, stolen British vehicles were re-purposed and used as transports and a tow for the 88. 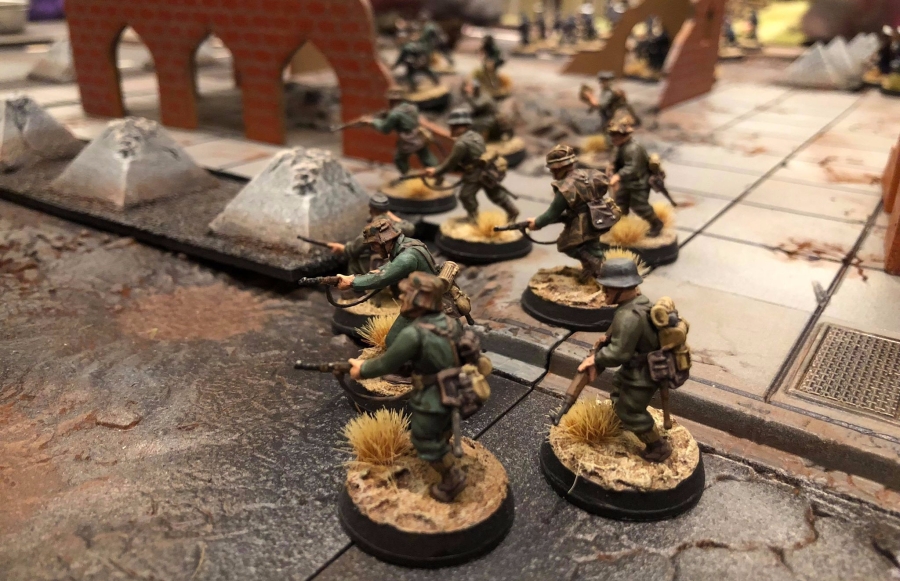 In the first game of the tournament we faced off against Jeff and his US Airborne in Sectors, a mission focused on capturing table quarters. Jeff’s teammate had to drop last minute and that left Jeff playing both armies! No easy task. After a tough first few turns we were able to push deep into enemy territory to end the game with over a half-dozen units in scoring position.

Andrew’s highlight: The first three turns of the game were balanced on a knife’s edge with neither team able to swing the game in their favor. But at the top of turn four Jeff launched a close assault with a Vet. Airborne squad into a squad of Inexp. Kriegsmarine. This combat would turn the tide of the entire battle. The Kriegsmarine won the assault, wiping out the Airborne to the last man and immediately followed up with an assault into another Airborne squad, which they also destroyed. The loss of these two Vet. squads collapsed Jeff’s right flank and allowed us to move several units into scoring position.

Ben’s highlight:  During the course of Andrew’s Kriegsmarine heroics, the Grenadier-laden trucks were also able to push up our left flank, taking out a howitzer and several squads. Nothing too major, but I absolutely love trucks. My 2 cm flak gun on the right flank made some nasty shots and wiped out a squad of airborne that was supporting the pair of M24 Chaffees (to which we promptly had no answer, as Andrew’s 88 was already dead and my 2cm got aced by a Chaffee right after it killed the squad). Which leads right into my second highlight, when Jeff went beast mode and literally crushed my Lieutenant under the treads of one of the Chaffees. 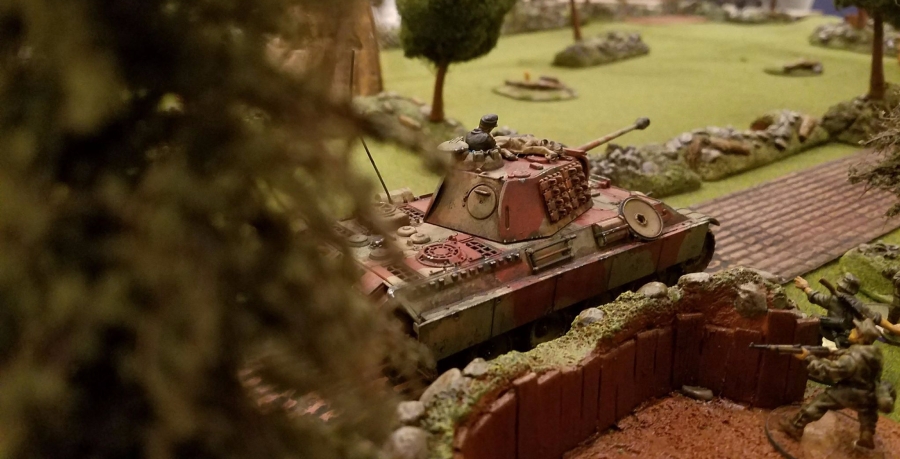 The Grey Wolves squared off against one of our favorite armies at the event. Luke and Michael’s Last Levy platoon contained a swarm of assault rifle laden Volksgrenadier along with not one, but two low-fuel, Inexp. Panther tanks and an Inexp. low-fuel Panzer IV. With that much heavy armor, our FlaK 88 was going to have it’s work cut out for it.

Andrew’s highlight: I was thrilled to start the game against some legit heavy armor targets! My 88 was set up in solid cover and had great sight lines on both enemy Panthers. But, there was a 24″ line of sigh limit due to heavy fog and I was not able to get a shot the first turn. Imagine my disappointment when on the second turn the first die pulled was for one of Michael’s tanks (he only had three dice in the bag!) and he promptly sighted a Panther on my 88 and blew it to pieces before I got to fire a single shot.  😦

Ben’s highlight:  Once again, Truck-Squads are the best squads. We outflanked both on the right, and while the middle/left side of the field was just a long-range slugging match that included a lot of inexperienced troops hitting the deck to avoid death, my trucks and squads were able to push in from the table edge, wipe out a pair of enemy squads, and then the Grenadiers put a panzerfaust shot right into the side of a Panther, eliminating it.

So there we were. Riding high off of two Major Victories we headed into Game 3 against none-other than the legendary Paul Stewart and his father Laurie. After one look at their combined USMC force we knew we had a tough fight ahead.

Andrew’s highlight: At last! I was able to fire a shot with my FlaK 88! I had been waiting all day for this moment. I chose my target, a squad of Marines taking cover in a ruined building, rolled to hit, and…missed. “No worries,” I thought, “I’ll get them next turn”. Too bad I was immediately zeroed by a Calliope launcher and every crew member was killed. Oh well 88, at least you looked good on the table.

Ben’s highlight: Highlights for us in this one were few and far between, but it was a fun game nonetheless. Surrounded means reinforcements can come from anywhere, so my main highlight was when I eyed-up their pair of bazooka teams (both of which had activated) and thought I had a ‘Gotcha!’ moment. I rolled the truck on from their table edge and lit up a flamethrower with the MMG (although I failed to kill it of course) and then had my jaw drop in horror as a third bazooka team saunters on with swagger set to at least 110%, putting a rocket right through the cab of the truck, knocking it out and throwing the Grenadiers inside down to the ground. A perfect example of why you should probably check that list your opponent handed you before the game! Oops! 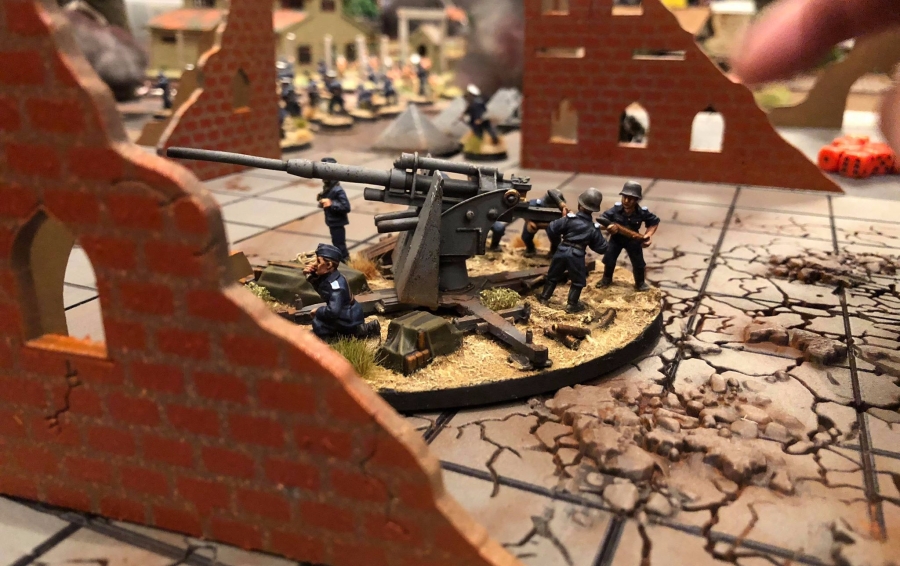 The Bolt Action Doubles tournament is one of our favorite events of the year and 2018 did not disappoint. We had three fantastic games against five wonderful opponents. The missions were exciting and the tables were incredible. Every year the community steps up their game and the level of hobby continues to climb. We cannot wait to see what folks bring to 2019!

When the dust settled we were both floored to find The Grey Wolves had finished second overall! Not only that but we also took home Best Theme! We couldn’t be happier with the results and plans are already in motion for next year.