When was the last time you read a myth or legend?

And when I ask this I don’t mean an abridged or Disney adapted work, I mean the real stuff.  Two, four, ten years? Maybe never? If it has been a while, I would encourage you to go and do so.  Take some time, find a translation, maybe even purchase a book, and read one. If nothing else your new book on Norse or Greek mythology will be a good talking point on your coffee table or bookshelf.  If you do get around to reading some, I think you will be surprised to find out/remember that they actually aren’t that exciting, at least not to our modern tastes. For, while I cannot speak for all written myths and legends, I have found that the ones I’ve read are quite direct when it comes to describing their action; as most poetry is.  For let’s not forget that myths and legends were all almost exclusively written as poetry. But when you couple this fact with our modern sensibilities, plus the fact that our culture would like all things either shown to us through visual media or described in great detail within our prose, I believe that we have, as a people, begun to lose a bit of collective imagination.

I say this as a mere observation not as a judgement, for I am just as affected by this as anyone else.  I, just a few sentences ago, said that I also find these stories lacking when it comes to a perceived sense of action and excitement.  But things are not all bleak, and this community of artists, sculptures, and modelers is a direct counter to this communal imagination drain that our society is going through.  Regardless of if you have just started hobbying and haven’t discovered the magic of Nuln Oil yet, or you are an old hand who is painting up their twenty-fourth army and working on your seventy-seventh Golden Demon entry, the very fact that you are engaging in a form of art still shows that your imagination is strong, vibrant, and, most importantly, present.

Poetry is a powerful form of communication that uses a beautiful economy of words that you will struggle to find anywhere else.  And it is my belief that when you combine this economy of words with the powerful concepts of myths and legends that you begin to see something truly magnificent.  But even despite the lack of excessive detail, if your imagination is strong, you can probably begin to fill in the blanks and see how terrible and magnificent some of the events described in these many works were and are.  This is all said to finally bring us to a new project that I will be beginning. 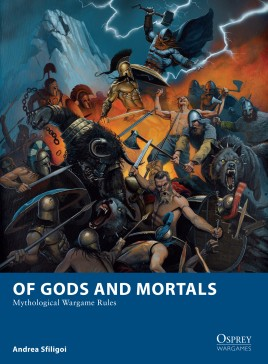 Of Gods and Mortals is one of the fantastic “little blue books” by Osprey Games. This game puts you in charge of a small warband that follows Norse, Egyptian, Celt, or Greek mythology.  Each warband is composed of around 20-30 models and led by a god and several legendary figures, along with units of mortals and some fun mythological creatures.  For instance your force could be composed of the following:

For starters my plan is to build two warbands, possibly three.  I will be building a Norse warband for myself and a Roman warband as another force.  The conversion to a Roman warband instead of a Greek one is a fairly simple one, seeing as the Roman gods were more or less renamed/reskinned Greek ones.

Surprisingly the hardest part will be converting the Legends portion of the list. This is where things diverge a bit more, but with the help of the unit creator section I should be able to build these units without issue.  From there we come across a fun problem, finding miniatures for both warbands. My plan is to primarily use the many different ranges from Wargames Foundry and some Warlord Games plastics the troops. For the Legends and Gods I want to go a bit further afield and to find some boutique miniatures that will really stand out on the table.

And with that said the starting gun goes off!  It’s time for the new project to begin. With the prospect of painting up some new and interesting miniatures and learning a new system this is sure to be a lovely time.  I’ll post an update once work begins on this project.

Until we meet again, happy hobbying and Carthago delenda est.

One thought on “Myths & Legends”

Done with the Tomb Scorpion and I'm thrilled with the results! Big props to @mengel_miniatures for the fantastic paint guide that got me started. I've got 6th Edition hype again... - Andrew
Jumping back on Middle-hammer - OG metal Tomb Scorpion. Lots still to go, but I've loving the look so far. - Andrew #warhammerfantasy #tombkings #middlehammer #gamesworkshop
James is back with more fantastic @dungeonsandlasersofficial tiles! This times it's the Dwarven Hall and it's all drybrush! #dungeonsandlasers #dungeontiles
Construction complete on the Rohan settlement. More MDF bases are in the way, and then painting can begin. - Andrew #gamesworkshop #lordoftherings #rohan #middleearthsbg