Part two in a two-part series covering the Chicago Dice team at the premier Bolt Action tournament in the Midwest – Operation Sting. You can also read Part One.

Mission overview – As the battle escalated, the fog of war turns the situation into chaos. The Axis forces are surrounded as the Allies close in…

Andrew: And we’re back for Day Two! To my delight I was matched up against an old nemesis – Dan from the ND crew. We’ve faced each other a few times now and it’s always a great time. Dan brought an all infantry US Airborne list with multiple bazooka teams, an Air FO and a whole mess of infantry. I was outnumbered almost two to one. But, my Jagdpanther would not be denied! I lucked out more than a few times with the bazooka teams either missing or failing to damage the beast. I was able to buckle down in the center of the table among some ruins and the Airborne broke against my army like a wave crashing against a cliff. It was a bitter, bloody struggle with major casualties for both sides. I was able to gain a slight lead taking out a few of Dan’s smaller teams and then I held on for dear life. After seven turns my army was able to hold the line and secure victory.

Ben: Game Four was against Tyler and his German force, consisting of a lot of regulars with a Panther, a transport half-track and a light-AT half-track. This game was once again a First Wave situation (for the attacking Allies) with Confused Fighting, meaning reserves could come in from any table edge except for where your enemy had just come in. This is a very dangerous rule for my force, as all my Fixed weapons (AT guns and MMGs) aren’t able to react well to enemies behind them. On Turn 1 I rushed a pair of AT guns forward in their trucks to unlimber in flanking positions on the Panther, which had been immobilized by preparatory bombardments. The Panther took out one and was brought down by the other. I was fairly aggressive in the middle of the board and looked like I had a good chance at taking the win, but the late arrival of a half-track full of Germans that was able to kill one of my guns kept us close and we ended up with a hard fought draw.

Paul: Day One ended with three draws and I thought that I was running middle of the pack, so the goal for Day Two was just make a good showing as I didn’t know where I was placed. Game Four was against the man, the myth, the legend Eric previously from the North Dakota crew and his awesome looking German army. So far I hadn’t played many armies with that were vehicle and this was no different, Eric had four solid units of infantry and smaller support units such as MMG teams and a sniper. We played “Surrounded!” so Eric had to deploy half his force, which I countered with bringing my whole force as a tight formation straight into the gut of his army, hoping to overwhelm him before he could get his reinforcements in. Having stayed away from the flanks, Eric’s reserves got very little action, while I got enough kills early on to secure victory. Great start to Day Two and with my dice hot, compare to yesterday’s “blah”, I felt pretty good. Sorry Eric. 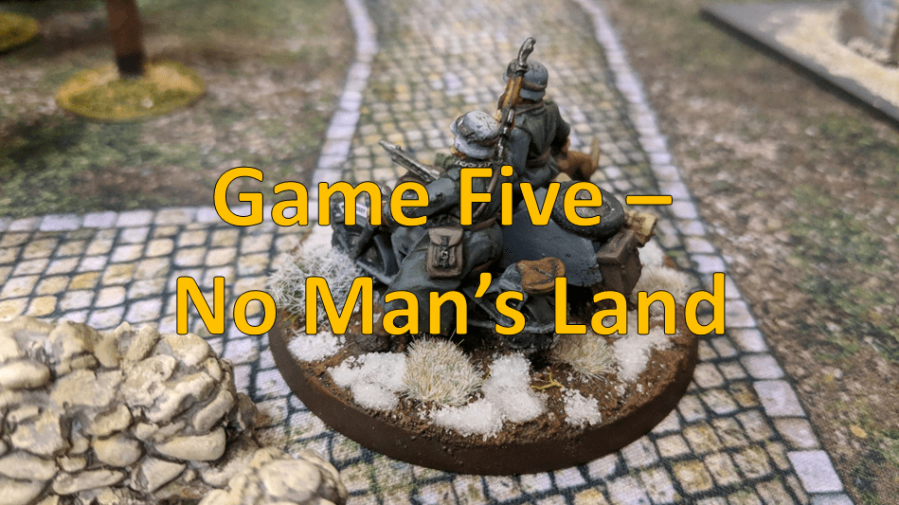 Mission overview – The two armies have been facing each other for days now. But today, at the first light of dawn, the time has come to break the impasse – the battle soon escalates as both sides try to crush the enemy.

Andrew: The final battle and another re-match from last year. Bruce has always been a fantastic and tough opponent. This year he rolled up to Sting with a gorgeous Red Devils army and they meant business. Unfortunately for Bruce, the focused fire from the German LMGs and some incredibly lucky Neb shots pinned much of British force in the open leaving Bruce with few options. The battle went on for the full six turns and a combination of cold dice and a few clutch failed morale tests left the British open to be picked apart without being able to make a strong threat move. I did not outplay Bruce, but I certainly out rolled him.

Ben: Game Five was the first game of the tournament where I was able to deploy the majority of my army on the table, but to counter that,  both sides received a preparatory bombardment and visibility Turn 1 visibility was restricted to 24”, preventing me from making use of my long-range guns. Several of my units rallied during Turn 1, with a few others that started with only 1 Pin going into Ambush in case the IJA got close enough to target. Aaron played aggressively on my left flank, using a Captain to rush both a Regular and a Veteran squad up in the hopes of a quick assault while using smoke to cover the advance. The smoke didn’t pan out, and I loaded up the left side with firepower making short work of the Regular squad and keeping the Captain and the Veterans pinned. Unfortunately the other side of the board did not go as well and Aaron was able to pick off my smaller units without too much effort, while my counter punches failed to really produce any results. Hard fought, but a loss on this one. This leaves Aaron and I at 1-1 in our tournament matches against each other and I look forward to the next one!

Paul: The last game of Operation Sting was against Dave and his Panther led German force. I have to say his display board was one of the nicest at the event in regards to realism and you could see the work he put into it. Game Five was where my dice got super hot, sorry Dave. Everything that could go right for me, went right. Highlights of the game was Dave getting the first two kills points of the game and then all hell broke loose. Firstly, my Inexperienced squad in an armed truck jumped out in front of the Pioneers and managed to get in two rounds of fire to destroy the Pioneers, then an artillery strike hit a building Dave had hid two full units of infantry in, a six was rolled and the heavy howitzer hit blew up the building, killing both units. The SAS then massed on the road and swamped the remaining units including the Panther, whose valiant effort to save the center was met by seven SAS who charged in and scored 7 hits (yes they all got on a 4+) and then rolled a 5 for a penetrating hit and a 4 to destroy it. At that point Dave only had his officer and a Sdkfz 222 alive. So seven kills to two kills – a solid victory for the British and a fitting way to end the last ever Operation Sting (tears).

Andrew: Operation Sting has been an anchor for hobby projects for the last three years. I’ve planned around this event and used it as a motivator to finish armies and to up my hobby efforts. It makes me sad that Sting won’t happen again. Brent and Seamus did an incredible job not only running this event but creating a community of like-minded hobbyists for a weekend of games and good times. Sting 2018 was the best one yet and I know I speak for the entire Chicago Dice crew what I say that it will be missed. But we have many events to look forward to! Adepticon will be here before we know it and there is a club championship to win in Omaha. There is no time to rest on our laurels – new challenges await!

Ben: Operation Sting is has been my favorite Bolt Action event for the 3 years that I have attended, followed closely by Doubles at Adepticon. The group that attends this event is bar none the most fun group of guys I’ve experienced tournament play with. A huge thank you to Brent and Seamus for running it, they do an excellent job and while I’m saddened that the event won’t be back in the future, I completely understand the reasoning. This year was the best one yet out of the years I have attended, with the hobby level skyrocketing across the board. There were a ton of beautiful armies and amazing displays this year. I know I am not alone when I say that even though I have been upping my game at the past few events in terms of the hobby level, I remain in awe of what people are capable of pulling off and it makes me want to push myself even further. In terms of my final thoughts on my tournament performance, hindsight is of course 20/20, so when it comes to individual games there were things I realized in retrospect that could have swung games one way or the other. But I enjoyed how unique my army was, even if it wasn’t as effective as I would have liked! I went into this fully focused on the theme of the army, and I think it turned out pretty well.

Paul: I was really happy with how my lightly armed SAS performed, the trucks were a costly unit in regards to kill points but the resilience of the SAS squads and the firepower of the Armored SAS jeep made up for them. I had a lot of fun, even though I played a lot more aggressively than I am used to and this created some costly mistakes, but I played five awesome opponents and am thankful to each of them for the challenges they created and the good humor they played with. I look forward to facing them again in the future. I am sure this will be a lingering point from all of us at Chicago Dice who want to say thank you to Brent and Seamus for running an awesome event and I am sorry there will be no more Operation Sting, but I have enjoyed them thoroughly and look forward to other Bolt Action events in the future such as the Bugeater GT in Omaha and Adepticon in Chicago.