Second in a series of articles covering Andrew, Ben and Dexter’s journey to Operation Sting 2018.

The surprise: After a few practice games with the Jagdpanther I can now fully appreciate one of the most powerful rules in Bolt Action – Tiger Fear. I knew I was taking a risk with a 390pt. tank (it’s a lot of eggs in one basket) but I gotta say, this thing is a beast. The Jadgpanther not only has armor 10 and a Super-heavy AT gun, it also forces Order Checks on any enemy unit that can see it! This simple fact means the Jagdpanther can have a massive impact on the game even when it’s not active. Anyone running Inexp. units against it will have a rough time just getting their troops to activate.

The expected: Beyond the ultimate power of the Jagdpanther the remainder of the list remains solid and dependable. Running Vets for 9 out of 11 units provides me with superior staying power. And I’ll need it. In total I only have 11 units, a pitiful amount in a 1250pt. game. But, when each of those eleven is a certificated ‘hard target’ it reduces the chance of one lucky round of shooting having a detrimental impact.

The wild card: Because the core of my army was feeling just a bit too dependable I’ve added a Nebelwerfer – the ultimate wild card. This unit has a legitimate chance of have zero impact on a game. That being said, if the dice get hot, oh goodness, buckle up. I’ve seen Nebs devastate entire back lines with one volley. If anything, the Neb will force my opponent to keep his units spread and he will have to deal with it. This unit is just too big a liability to leave on the table. 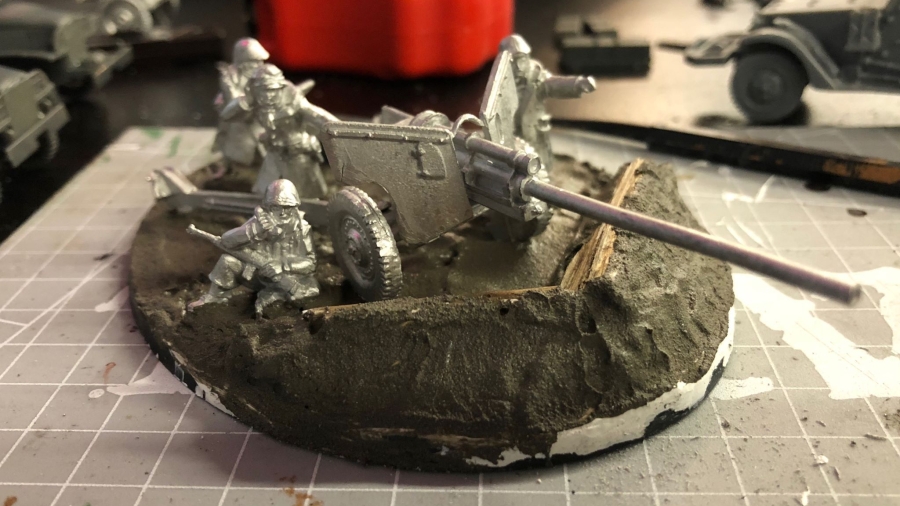 After writing the concept for this list back in April, and talking it over with a few other folks, there were a few points we all agreed upon.  The list provides a lot of firepower at range. However, being limited to a single infantry squad, it lacks mobility and offensive objective capture potential. It is very much scenario dependent army.

Looking at what I’m bring to the table; 4 Anti-Tank guns, 3 MMG teams, a Lieutenant (and his buddy), a 12-man infantry squad, a medic, 4 trucks (each with an MMG), an anti-aircraft halftrack and a transport halftrack with HMG. As you can see, this list can shoot. A lot. But with the limitations of a single infantry squad, and 7 Fixed units (cannot move and fire), I will have to be very careful with my deployment. This is where one of the big weaknesses comes in, in missions with First Wave I will have to tow those heavy AT guns with trucks to get on the table, thus guaranteeing that they will not be able to Fire in Turn 1. Also, First Wave (or any scenario where I must tow the guns onto the table) means I will not be able to use area cover for the AT guns, as you cannot move artillery into rough ground.

However, my army should perform well in defensive situations. Carefully placed fields of fire will deny movement lanes to my opponent. I may make use of Ambush more than I usually would. I’ll want to keep opponents at range where possible, as in test games it became obvious that if an opponent can get in close I will be in trouble, as my units are easy to kill. Also, being a static army, enemy indirect fire won’t have much of a problem zeroing in. For objective capture games, I’ll need to utilize my halftracks and infantry squad in cohesion to advance on objectives. There is also the option of advancing up with MMG teams in order to capture closer ones that are undefended, although this does mean they aren’t shooting.

With just over four weeks until the event, the boys have a lot of work to do! Check back in next week for the Road to Operation Sting – Part 3: The Hobby.

Done with the Tomb Scorpion and I'm thrilled with the results! Big props to @mengel_miniatures for the fantastic paint guide that got me started. I've got 6th Edition hype again... - Andrew
Jumping back on Middle-hammer - OG metal Tomb Scorpion. Lots still to go, but I've loving the look so far. - Andrew #warhammerfantasy #tombkings #middlehammer #gamesworkshop
James is back with more fantastic @dungeonsandlasersofficial tiles! This times it's the Dwarven Hall and it's all drybrush! #dungeonsandlasers #dungeontiles
Construction complete on the Rohan settlement. More MDF bases are in the way, and then painting can begin. - Andrew #gamesworkshop #lordoftherings #rohan #middleearthsbg