Warhammer 40,000 has entered a new age – the age of the Dark Imperium. In this deadly era, five warlords answer the call to create new armies for the new edition.

Every two weeks I will bring you updates from the front as Ben, Duffin, Brian, Adam and Dexter progress from concept to fully painted reality. Join me as we begin our journey into the grim darkness of the far future…

When I first started 40k, back during  6th Edition, my first project was an Imperial Guard army. For a while, this was enough. I expanded that force and had a lot of fun with it, but eventually, hobby ADD kicked in and I wanted to start something new. Because I wanted to stick with the ‘good guys’, I looked at Space Marines, but I didn’t want normal cookie-cutter marines so I considered Dark Angels or Black Templars. Then a friend pointed out the Black Library novel, Helsreach. I tore through it in maybe four days, and my mind was made up. I purchased a fairly significant Templar force, built it up, even started painting some test models…and then hobby ADD showed up again and I shifted over to Warhammer Fantasy and then to Bolt Action. All while the dust built up on the Templars still in their boxes.

Here we are at the launch of 8th, and I’ve decided it is time to do the Templars justice. I re-read Helsreach about a month ago, got myself all hyped up again, stripped the (fairly minimal) paint off the models, fixed damaged ones, and prepped them for a fresh go. In order to ensure that I don’t go ahead and overwhelm myself by trying to work on a whole army at once, and for my part of our little Tale that we’re weaving here,  I’m limiting myself to how much I tackle at a time.  I’m working on three units at the moment:  A ten-man Crusader squad, a Rhino, and a five-man Terminator squad.  The first Crusader squad and the Rhino are the templates upon which the rest of the army will be based, so there may be some trial and error involved, but it shouldn’t be too hard to get the final scheme set.

I’ve always loved the aesthetic of the Templars: the flowing tabards, the heraldry, and the general badassery.  Here’s to hoping I’m able to make their righteous zeal shine through the paint!

Hello there, Duffin here adding my story to this tale of gamers. I’ve been in the 40k hobby for about 13 years now. I started up at the end of 3rd Edition, beginning of 4th Edition and being colorblind, I used to never be into the painting aspect of the hobby, so I would normally run an army of gray or primed models. But as I have gotten older and started to overcome the fear of painting I have an itch to do better. So my tale should show my progress of becoming a better hobbyist.

I’ll be building an Astra Militarum, A.K.A Imperial Guard, force.  I used to play them back in 4th Edition and a little bit of 5th but sold them when I was in need of cash. Now I find myself strapping my boots back on and taking my lasgun in hand to charge into the enemies of the Imperium once again. I am building more of a narrative army of which I can write stories about my units. To me, it’s a lot of fun writing a pre and post-battle report; what better source for Imperial propaganda than the overcoming of insurmountable odds?

But I digress, and I apologize. I hope to get out of this a fully painted and based Astra Militarum army with slight conversion work. I have the plans for the route I want to take, but it’s fun seeing where the road will take me. I will be using Victoria Miniatures as a base outfit for my army. Seeing as the guard take man or woman I plan on mixing up squads to show the true army of the Imperium, humanity.

I’ve painted up a couple marine armies in my day, but I really wanted to challenge myself on this project and what better challenge than the White Scars! I’ve never fielded a bike heavy list, so I am intrigued to see what I can do with the bike models. I picked up a Dark Imperium set, a couple boxes of bikes, and a speeder to get started. Things that I hope to be able to implement in this force are; pretty much universal customization, most models will be converted, kitbashed, or green-stuffed a little (top knots and Fu Manchus for everyone!), with special attention to characters and sergeants, and, hopefully, a heavily converted Khan on bike. I also hope to get to use my airbrush in a subtle way that goes a little beyond just base coating but doesn’t give my models an overly “airbrushed” feeling.

The hobby aspect of this army is going to be first and foremost in my approach. I’ll certainly put in some work to make it competitive, but my objective is to get a nice white finish on these dudes, put in a little freehand, and deliver a visually appealing force. That said, the theme to this army is going to be bikes, speeders, Stormtalons, and maybe some of the new Primaris marines.

Adam – Talons of the Emperor

I love starting new projects and I’ve realized that’s my hobby. But what I stink at is finishing them. So, when I was approached with starting a new project, I jumped at the chance. The fact that I’ll have social pressures and deadlines here on Chicago Dice only sweetens the deal!

With the launch of 8th, I’ve been trying to find a faction that inspires me and will be a fun hobby project to boot. During the launch of the new edition, my friend thrust the Talons of the Emperor box set into my arms and told me to start them – as good a reason as any to start a new project. As I looked closer I fell in love with the aesthetic and feel of the miniatures.

I grabbed my Index: Imperium 2, and started to look at what makes this army tick. What I gather at this early stage is they are a super elite, small model count, force (a big plus for me). They are expert close combat fighters with a high amount of attacks and high strength to match. However, they are lacking long range options with really only three to chose from. I decided the force will be built around a strong core of the elite Custodes as they’re hardy, dangerous and should be a force to be reckoned with every game. The Land Raiders will act as the long range punch firing lascannons and heavy bolters. The Sisters of Silence will act as the mid-range troops that will engage weaker troops and grab objectives utilizing their Rhino transports. I soon discovered that there is no HQ choice for either the Custodes or Sisters of Silence. So, I chose a pair I felt was appropriate, Inquisitor Greyfax and St. Celestine. 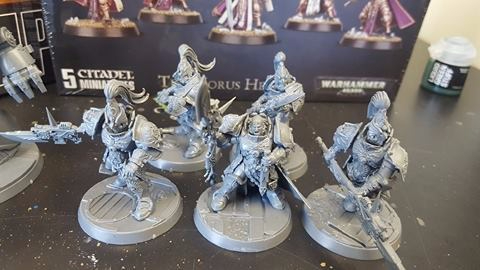 I haven’t solidified a plan on how to paint these yet, but a lot of gold will be involved. The true test will be how much detail I chose to put into each individual model as I usually go crazy on a few and lose steam on the project. I can’t let that happen with this endeavor so, with that in mind, I’m leaning on some cans of Retributor Armour and washes to do most of the work and I’ll clean up with a brush after.

I’m a green 40k player and this new edition has inspired me to hobby and game harder. So this army will hopefully make it’s way to a few tournaments. I’m very excited, not only to get started hobbying but to roll some dice as well! I can’t wait to see what the other guys come up with!

Wraithbone, it grows into smooth lines and big guns. Take a few old souls and some wraithbone and suddenly you have something that looks like an old Jag with huge bloody guns. That is what this army is, it’s the big blokes packed into old Jags coming after you.

I began collecting the bones of this army when the “new” Wraithguard boxes dropped. I’ve picked up a rugby team! A pair of Wraithknights will be my locks Welshy and Lurch, some old Wraithlords will fill in the front row, and a Wraithseer to fill in the last key position of eight men! I have no idea what the rules are for any of these things anymore but I am very excited. Oh and I got a few boxes of Wraithguard and Wave Serpents to play backs, they are my lads in the Jags. There will be a wee elf man in the scrum half position with the Farseer I believe.

As far as painting goes I will be using a lot of Badger’s Minitaire ghost tints, this is going to be a freshly grown army of ghost warriors. I’m painting up test models now, red with blue accents currently is winning. I feel the wave serpents will have to be British racing green.

And so it beings! The five warlords have taken the first steps to creating new armies for the new edition. Be sure to check back in two weeks for a brief update.

Keep in mind, although the edition has changed, war…war never changes…

3 thoughts on “A Tale of Five Warlords – Introductions”

I don't normally post product announcements but HOT DAMN these have to be shared!
Terrain progress continues! Four buildings, creators, fences and rubble are all completed.
It was the "...& Warhammer Fantasy Battles" that sold me 🤩
The terrain is all built (well, one more little house to go) so it was time to mess around with the layout.